My first year as a diagnosed Coeliac sufferer coincided with my busiest ever year of travel.  I went to Egypt 5 times, to the USA, to Spain, to the Yorkshire Dales, attended a walking leader course in Wales and made numerous visits to my mother, who suffers from dementia.  It has been quite a challenge to stay well with all with all these changes in routines and forced eating out, but on the whole the experience has been really positive.  It does take planning, and a change of attitude towards food and eating out.  It is just not possible to eat what other people do – but then having been a foodie and a health foodie at that, I have been used to being picky about food.

Firstly travelling to Egypt! This could have been the most difficult challenge but I found out that Egyptair does do gluten free meals, one just has to ring up the airline to book as it is not available on-line (although cholesterol free meals are?!!). Special meals arrive about 15 minutes before everyone else has theirs which is nice. Cairo airport only has fruit that is not wrapped in some sort of wheat parcel but arriving at 7 pm this is not a problem. The little resort at Sharm I visit has a buffet breakfast where one can choose omelettes, cheese, yogurt, fresh fruit, tomatoes and cucumber. A slice of gf bread from my travelling stock 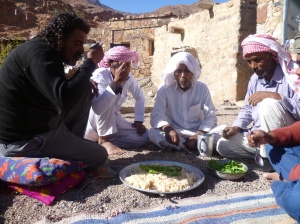 completes a good breakfast.  The Bedouin quickly got on board with my ‘weird’ diet and soon everyone knew that I mustn’t have gluten and they have catered for me very well wherever I go.  The Marriot in Cairo was also good with so many gluten free options to choose from. I carry a Gluten Free Travel card in Arabic, downloaded off the internet so people will know exactly what my requirements are.

When we went to the USA to visit our son, we stayed with friends who were very

accommodating and then hired a camper van for the journey from San Francisco to Bend in Oregon.  Self-catering is easy when there are lots of great health food supermarkets to stock up on. One night we went to a cinema called McMenamins (a chain of cinemas in the USA), to see the new Jungle Book film and they had separate catering facilities for gf so chips and all manner of junk food was available – just this once I indulged! British Airways had good gf meals on the flights there and back.

At Heathrow airport, there are gluten free snacks at Eat, gf options on the menu at Wonder Tree, and the Gorgeous Kitchen, plus a branch of Carluccio’s which is coeliac approved, so no problem having  lunch before an afternoon flight.

Going on holiday to Spain did worry me but it turned out to be a very positive experience and I didn’t get gluted once.  We booked through Collett’s Walking Holidays and they ensured that my dietary needs were communicated to their staff. Our hotel, in the tiny mountain village of Panticosa, was excellent with the chef preparing special adaptions of the meals just for me.  I bought ingredients for my own sandwiches with gf wraps I brought with me, and eating out was fine as they seem very aware of coeliac disease.  Our waitress at one restaurant said it was no problem as she had a cousin who was coeliac and knew exactly what was required.

Our walking holiday to the Yorkshire Dales, also booked with Collett’s Walking Holidays, was also fine with a choice of restaurants in the little village we stayed in.  One restaurant called Thirteen, had a menu that was all gf all the time as the chef had a problem with gluten!  The food was some of the best I have ever had. Even the village pub had meals that were gf.  The hotel we stayed in provided nice gf breakfasts and had recommended the excellent restaurant 13.

The worst experience was of Brittany Ferries on their Plymouth to Santander route.  We had previously used the ferries to get to Northern Spain on two other holidays and enjoyed great meals in the restaurant, before I had my diagnosis.  This time the company were quite unhelpful with advice when we booked, just saying we would have to ask the staff if they had any gf options but saying that they couldn’t do special meals.  When we asked one member of staff at the restaurant he just said take whatever I like from the buffet and remove the bread! Another waitress was a bit more helpful but they didn’t really know which foods were definitely gf so I worried about having a gluten attack. This spoilt the experience for me.

On visits to my mother’s house I just took most of my food with me.  She hasn’t been able to cook for herself for a while and would not have understood my problem so it was easier to sort it out myself.

When travelling I do take snacks and emergency foods with me.  9Bars are almost a meal in themselves and great if one is being very active. Packets of mixed fruits and nuts are good too, and I have found you can’t always trust the ones abroad, especially if they are spiced as they use some flour in the mix.  Naked bars are good alternatives to 9Bars.  BFree wraps are good and actually last quite a long time without refrigeration. And of course fruit is usually freely available too.

During my October trip to Sinai, Egypt, I led a group to build a small dam in the high mountains. There were 8 of us in the group, and just by chance, 3 of us were coeliacs.  The other two were mother and son and long experienced in travelling gf.  Freddie’s job takes him to some of the most remote parts of the world to film animals and he doesn’t find living gf too much of a problem, so there is hope for all us coeliacs.

Helen's primary work takes her to Sinai, Egypt as Project Manager for the Makhad Trust. She continues to work as a Nutritonal Therapist on an occasional basis and has over 20 years experience.
View all posts by Helen Cranston →
This entry was posted in Nutrition and tagged Coeliac Disease, Collett's Walking Holidays, gf, gluten free travel, travelling gluten free. Bookmark the permalink.