The Makhad Trust, a small charity based in Cheltenham, works to promote the relationship between environment and spirit, providing a meeting space between the two.  The work brings together people from UK and indigenous peoples, mostly in Sinai, Egypt providing working journeys on small projects.

Restored well in the Blue Mountains

Helen works part-time as the Project Manager, initiating projects, organising journeys, and building links with schools, colleges and Universities with the aim of promoting the work of the trust.  However, Helen’s main work for the Trust is facilitating the wells restoration programme.

The wells restoration programme has been operating since 2007 and in that time over 293 wells have been sponsored by a mixture of individuals and trusts.  About half of the restored wells are orchard garden wells, enabling the Bedouin to grow food for their families and a small surplus to provide a much needed income.  The other half of the wells are community drinking wells providing clean water to around 200 Bedouin for each well. The wells programme has had a beneficial effect on children’s health and has enabled a better standard of living for many Bedouin.  The wells programme will continue as there are another 300 wells on our waiting list!

Other current projects include training new Beekeepers, initiating a Library for women and children, building small dams in the high mountains and we are just starting a new project teaching orphaned teenagers and fatherless boys to grow herbs for income.

As well as Working Journeys, the Makhad Trust has also run Retreat Journeys.

The journeys undertaken by participants to Sinai are among some of the best examples of  sustainable tourism.  Many of the journeys help the Bedouin directly whereas most tourists visiting Egypt are contributing to the problems the Bedouin have with lack of water.  For the last 10 years the rainfall pattern has changed and led to draught – it is possible that this is due to climate change.  Wells have dried up and the Bedouin gardens, so important as a source of food have been dying. To add to their problems, it is thought that the vast quantity of water being pumped out of the water table around Sharm-El-Sheik to service the tourist industry, is causing the whole Sinai water table to drop.

The Makhad Trust has been instigating projects to deepen wells and build small dams to hold back the occasional rainwater that now falls.  As a result of this work many Bedouin families have been able to revive their gardens and have more food to eat and produce to sell.  The dams have been a collaborative effort between the Bedouin and British working parties.

You can join one of the magical working journeys in Sinai by visiting the Makhad Trust website for information or by contacting Helen.  The next working journey is to build a Dam in the high mountains near St Katherines  in April 2017, led by Dick, one of our trustees.  The dam will help to provide much needed water for 30 Bedouin families.  This is an open journey for anyone to join.   See the Makhad Trust website for more information.

Occasionally retreat journeys are organised, usually to the desert outside of the mountainous area.  The desert has been a special place for those seeking spiritual connection – it is a  journey into the desert silence and our own souls.  Mystics, prophets and hermits have been leading lives of devotion in the amazingly beautiful Sinai desert for hundreds of years.  The beauty  and the emptiness of the landscape give us the space  we need to reconnect with ourselves.  If you are interested in bringing a party of people for a retreat, please get in touch with Helen.

The beauty of the desert

More information about the Makhad Trust

For 10 years we have been working with the Bedouin of South Sinai on small scale water conservation projects.  As well as the mountain tribe of Jebillya around St Katherines monastery we have also worked with the Mouzaina tribe at Nuwamis.
Both tribes have a long history, the Jebillya tribe was founded around 5th Century from Romanians shipped in by Emperor Justinian to support the monks of the newly built St Katherines monastery, who then intermarried with the local bedouin.  They established orchard gardens in the mountains that are still there but falling into disuse as a nine year drought has caused trees to die and very little is able to grow.  The garden owners have had to look elsewhere for an income and that has been from the increasing tourist trade, increasing that is until this year which has seen a plummet in numbers due the uprisings of the Arab Spring.
The Makhad Trust has been working with the Bedouin on water conservation projects to help restore the mountain gardens and make the most of the small amounts of rain through building small dams high up in the mountains.  As well as raising money for the gardens we have been taking out parties of people to work alongside the bedouin building the dams and repairing the gardens.  In our work over the last 7 or 8 years we have made strong links with local people and been a small force for empowering change with the marginalised semi nomadic bedouin.  Makhad means meeting place in arabic, and one of our charitable aims is to bring about meetings between people in the west and nomadic peoples for mutual benefit.

Links with Schools, Colleges and Universities 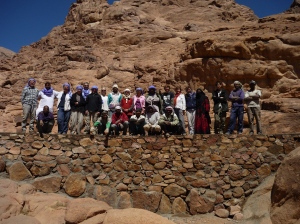 We want to expand the numbers of colleges and universities we work with on these projects.  Previous journeys  have included parties of students from University of Gloucestershire, Concordia University in the US and Leeds Met University as well as schools.  The journeys can focus on geographical, geopolitical, historical and archeological, religious, cultural aspects of the Sinai and it is a rich experience for them all.  There is a You Tube video made by students on the Leeds Met journey to watch.
The dam above and below is one of 17 small dams built so far. The winters of 2010/2011, 2011/2012, 2012/2013 and 2015/16 brought a lot of rain and the dams filled and held back water for several months each time.
You will find lots more video clips on You Tube made by other students and pupils.  See King Ethelberts School and interviews with the Bedouin – Interviews 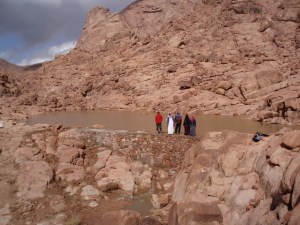